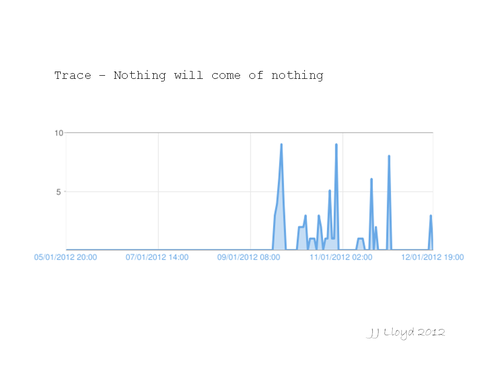 Nothing will come of nothing, 2011. inkjet printout on A4 paper
I created a Blog called “Nothing will come of nothing” with no content (9th Jan 2012) and then posted a message on the OCA student forum informing readers about this blog stating that it was to remain empty apart from posts about the number of visitors to the site.  After 4 days the blog was deleted after 5 days the forum thread was deleted. This image is a plot of number of visitors; no other records of the blog were kept.  There were a total of 87 visits to the blog

The title is from King Lear, which is a version of the philosophical statement that “nothing can come from nothing” which is akin to the conservation of energy in modern physics.   Several artists have been concerned about nothingness and absence, such as John Cage,  (4 mins 33), Damian Hirst:  “the impossibility of death in the mind of someone living” and Martin Creed: “The lights going on and off”

I was concerned with ideas of: